The IR35 Status of Marvel’s Avengers

At ClearSky, we believe all contractors are superheroes. But no matter how super you are, the IR35 legislation can be a little tricky to get your head around. With the new Avengers film, Infinity War, set to be released next month, we thought we'd take a look at how this team of superheroes would fair in the eyes of HMRC when it comes to their IR35 status...

The pesky super villain, Thanos, is threatening the world in the latest instalment, looking to bring destruction and chaos only to be stopped about four fifths of the way through. Or so we’re guessing. Now this blog isn’t a review about Infinity War. That will follow.

The prospect of bringing in contractors to deliver certain outputs is certainly appealing. That's where The Avengers come in: we’ve got Tony Stark/Iron Man, Bruce Banner/The Hulk, Thor Odinson and Clint Barton/Hawkeye. They are contractors. They’re all being contracted through an end client called S.H.I.E.L.D. (a quasi government organisation in this instance). There are various projects that S.H.I.E.L.D. are running. They’ve a high turnover of staff (no surprise), light on the ground and in desperate need of support.

S.H.I.E.L.D’s HR manager, who’s in charge of short term recruitment, is a less than approachable chap called Nick Fury. Due to the recent legislation changes, Mr Fury is rather furious. It’s up to him to determine who’s inside and who’s outside of IR35. He definitely needs superhero powers! So we’re going to help Nick (or Mr Fury as he likes to be known) by giving him an expert opinion on each contractor/Avenger.

Would Marvel's Avengers be Inside or Outside IR35?

We’ve heard a few people say “you have to be a superhero to work out your IR35 status these days”. We couldn’t agree more.

With the new Avengers movie just around the corner, we focus on S.H.I.E.L.D’s predicament with bringing in contractors. The CEO and HR Manager, Nick Fury, is looking for an expert opinion on each contractor/Avenger and we're here to help. 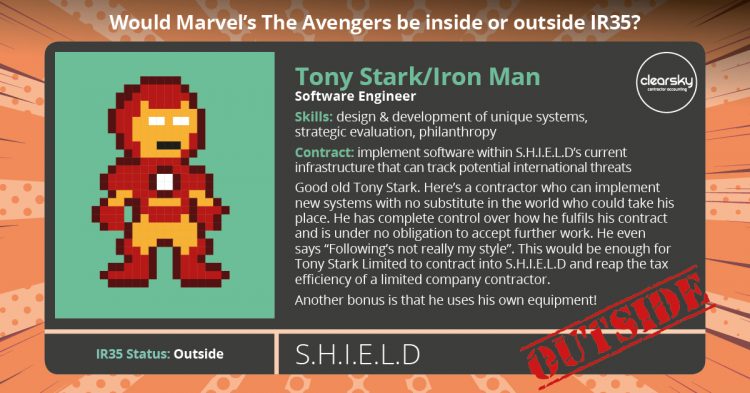 Good old Tony Stark. Here’s a contractor who can implement new systems with no substitute in the world who could take his place. He has complete control over how he fulfils his contract and is under no obligation to accept further work. He even says “Following’s not really my style”. This would be enough for Tony Stark Limited to contract into S.H.I.E.L.D. outside of IR35.

Another bonus is that he uses his own equipment! 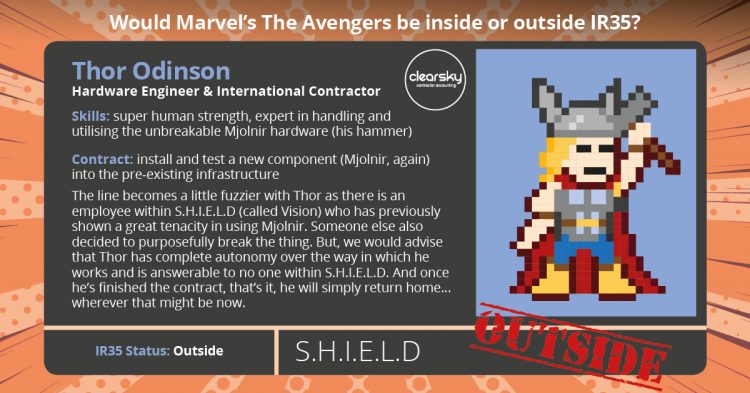 The line becomes a little fuzzier with Thor as there is an employee within S.H.I.E.L.D (called Vision) who has previously shown a great tenacity in using Mjolnir. Someone else also decided to purposefully break the thing. But, we would advise that Thor has complete autonomy over the way in which he works and is answerable to no one within S.H.I.E.L.D. And once he’s finished the contract, that’s it, he will simply return home… wherever that might be now. 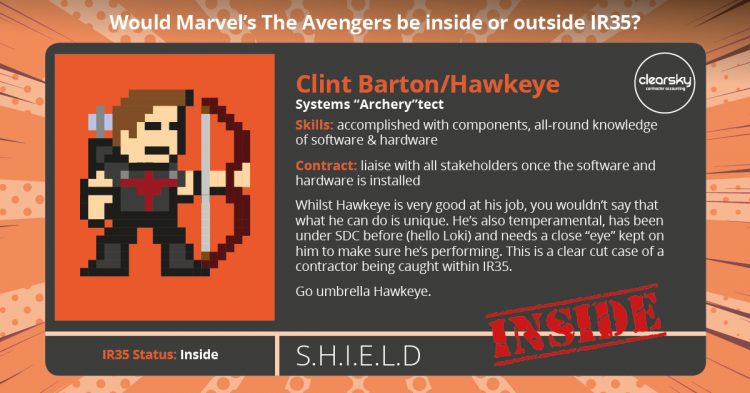 Systems “Archery”tect
Skills: accomplished with components, all-round knowledge of software & hardware
Contract: liaise with all stakeholders once the software and hardware is installed

Whilst Hawkeye is very good at his job, you wouldn’t say that what he can is unique (or even that good). He’s also temperamental, has been under SDC before (hello Loki) and needs a close “eye” kept on him to make sure he’s performing. This is a clear cut case of a contractor being caught within IR35. 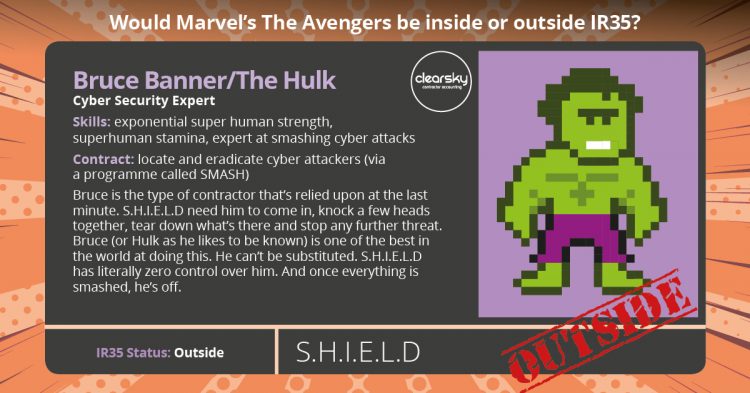 Bruce is the type of contractor that’s relied upon at the last minute. S.H.I.E.L.D need him to come in, knock a few heads together, tear down what’s there and stop any further threat. Bruce (or Hulk as he likes to be known) is one of the best in the world at doing this. He can’t be substituted. S.H.I.E.L.D has literally zero control over him. And once everything is smashed, he’s off.

If you're a superhero needing a hand with an assignment, or a contractor looking for IR35 advice look no further. At ClearSky Contractor Accounting, we understand that the IR35 legislation can be difficult to understand which is why we've put together our Essential Guide to IR35.

If you'd like to discuss IR35 further please call your personal accountant, or give our Best Advice team a call on 0800 464 0381

Review of changes to the off-payroll working rules – report published

Read our summary on the government's review into the reforms to the off payroll working rules, which was published on Thursday the 27th February.
February 28th, 2020

Have you ever wondered how much your favourite Disney characters could claim back in mileage expenses? Discover the magic in our blog.
May 30th, 2019

IR35 in The Private Sector: Make Your Voice Heard

IPSE’s recent article has condemned the proposed changes to IR35 in the private sector and urged the self-employed to take action. Find out what you can do.
October 24th, 2018